I got up early again, trying to get in as many miles as I could before the heat set in. I knew it was going to be a tough ride. This was the last day of my mini-tour of Thailand and Malaysia. I had arranged for a bus to take me from Penang to Singapore. (That is where my flight home is from.) I was hoping to get into Penang before dark and maybe get a chance to see the city.

The first goal was just getting out of Thailand. The morning was cool, by Thailand standards. Compared with the afternoon before it was quite pleasant. Gone were the sore muscles and bones of the day before. I was fresh and everything was going well. The road was even fairly flat with no wind. I was off in a crazy place doing something amazing.

Things started to get a bit more hilly as I crossed the border in to Malaysia. I love crossing borders on a bike. There really isn't anything like crossing into a new country under your own power. Knowing that you got yourself there. I guess it feels like really earning that stamp in your passport. The checkpoint itself was fairly routine. Maybe that is another thing I like. When you bicycle across a border they don't ask too many questions.

Changing countries didn't make the landscape less awesome. I tried to take pictures of it, but that can't truly express how gorgeous it all was. The little details that you pick out. The sounds. The smells. The heat. This world is so big and so amazing I wish there was a better way to share experiences like this. The only thing I have come up with so far is to be aware of being in that place and enjoy every moment of it. 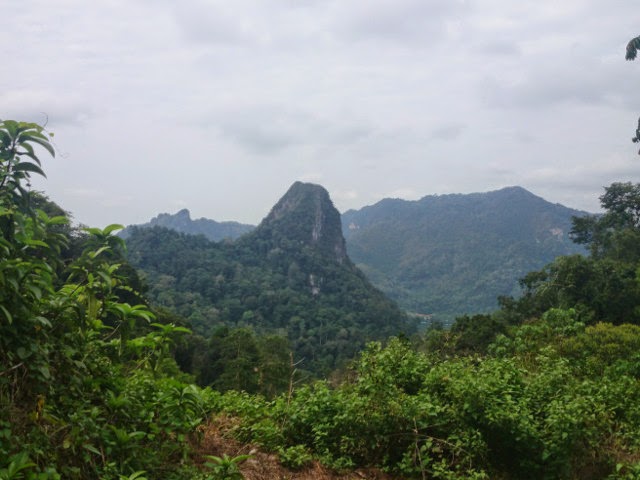 After the border the road got really steep really fast. I had seen it on the map the
day before. It looked like someone had just drawn a squiggle on it. That is never a good sign. On a two dimensional map that is a way to express how a road changes elevation. And change it did. Even in the reasonably cool morning, I was overheating. I had to take a break three times on the way up. Then again, the view from the top was well worth it. The decent on the other side was even better. Steep, with tight corners. Even with my bag on the front it was awesome. I hit 42 miles an hour going down that thing. Maryhill Loops, eat your heart out.

That was the last of the really interesting terrain though. The rest of the day would be flat. And hot. Then hotter. Then even hotter. The afternoon became clear blue, with a few clouds hiding out by the horizon. It was over 100° in the shade, and there wasn't much of that. I know I have biked in hotter weather, but at least that was dry heat. This was a wet heat where sweating didn't do much. There were parts where I couldn't make more than five miles without stopping. I went through 11 liters of water. Most of that was with ice in it. It was apparently a Malaysian holiday, so that meant most of the stores were closed. Fortuneatly most of the little restaurants and other milkshake shops were open. Basically all of them had ice. I would stop and top off with more ice and water. Then I would go for about 20 minutes and have to stop because I was overheated. It really was miserable going. I can't say that I enjoyed it that much. Somehow I managed to keep pushing myself.

About an hour before sunset, the sky clouded up. It didn't cool things off that much, but at least I was out of the sun. A thunderstorm rolled over and it became so dark I though the sun had already set. The rain at least did finally cool things off. When the rain stopped I got a bit of a tailwind into Butterworth. I was cranking as hard as I could to get there before dark. I didn't quite make it, and by the time the sun set (for real) it was raining again.

In Butterworth I caught the ferry for Penang. I was on with some cars and about 50 other locals on motorcycles. I wonder what they thought about the weird guy on the bicycle. I could see the city in front of me, sparkling in the darkness. I thought it was going to be some backwards place. Penang looked to me like any modern western city. I thought I had an hour to play around the island. Maybe get some food. Well, it turns out there is an hour time difference between Thailand and Malaysia. So instead of getting to enjoy the city I had to race off to the bus station. I got there just in time to get my bus. Wet, tired, smelly, and sore.

Bar none, this was the hardest day of my life. I can't think of any other time where I have pushed myself so hard for so long. One of my friends was asking me why I do this stuff. I usually say because I enjoy it. But I have to admit the middle of the day was just grueling and miserable. It isn't that I am into masochism. I don't enjoy making myself suffer. I have noticed that I am able to endure hardships that most others can't. That isn't meant as an egotistical brag. That is just a recognition of my character. Since I can, I try to push myself as far as I can go. George Mallory was quoted as saying he wanted to climb Everest "because it's there". I think there is something in us, some of us at least, that wants to see what our limits are. To take on the big challenges and see what happens when the rubber meets the road. At least this way, I get to see a few more back roads I never planned on going to.

I also want to thank all the people who helped me out along the way. I know they will never see this. Most don't even speak the same language. All the same, they were there with some ice or some water. Truly, that was saving my life. It is amazing to travel and see the world is filled with great people. People who look at some crazy fool and do their best to help. To all those people out there, thank you.

-Dravis
Posted by Dravis Bixel at 9:09 AM