A man died on my route to work today. I noticed the flashing lights of the police cars as I made my turn onto East Marginal Way. I was hoping that it was just a collision of two trucks that also navigate the same road. The mangled bicycle lying in the road and the shape under the white sheet told me that something terrible had happened.

I don't know much more than that right now. I don't know exactly how it happened. It isn't even clear who the man is, but if you are reading this just take a moment for him and his family. 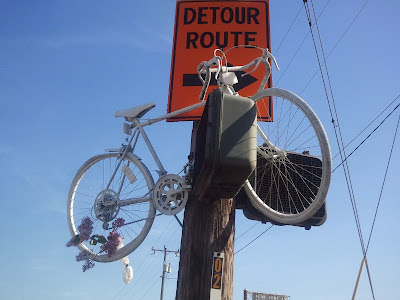 What makes this even more tragic isn't just that it is the first day of Bike Month. It is also that, I believe, this accident could have been prevented. A little paint, a tweak to software, maybe a bit of concrete, and just a little planning could make that intersection much safer.

Lets face it, that is a dangerous intersection. It has heavy traffic on it during morning rush hour, both bikes and trucks. For bikes this is the main route that leads to the Spokane Street Bridge. That bridge mind you is the only direct route from West Seattle into downtown. This makes it one of the most used bike routes in the city. On top of that this road is also filled with trucks in the morning. (The evenings tend to be much quieter.) It may seem strange but I tend to like truck drivers. They just have more experience driving than your average person. I often find that they are courteous and get what is going on. That doesn't mean they have clear visibility or the ability to stop however. In general I don't mind biking down that stretch of road. There are bike lanes on each side of East Marginal and even a sidewalk on the west side. (Not that I recommend biking on sidewalks.)

So what makes this intersection so dangerous? Most of it comes down to poor planning. The roads make sense from the perspective of a driver, but it is clear that no one thought about who bike riders would use the road. The cyclists who come from West Seattle are routed along the sidewalk on the opposite side of the road. To use the bike lane they are forced to cross over three lanes of this heavy truck traffic. There isn't even an indication of a crosswalk in the area. This is just dumb. It was bound to happen. I was wondering just last night why that intersection hadn't hurt or killed someone more often. Now it has.

The galling thing is that the solution to this would be simple. Don't direct bikes onto the sidewalk. They aren't safe there. Instead ensure that bikes have a place on the roadway. Yes, even with the big trucks. All that is needed is a protected lane for getting off the sidewalk from the Spokane Street Bridge. Something similar is in place on the Fremont Bridge. Then a few sharrows along Spokane Street before East Marginal. Now instead of being on the opposite side of the road, cyclists would end up naturally in the bike lane. This would only require a bit of cement, some plastic posts and a couple cans of paint.

Even worse the Mayor and the Seattle Department of Transportation are patting themselves on the back for saving almost $12 million on the widening of the Spokane Street Viaduct. If just some of that money and a bit of common sense had been used, we might have one more cyclist in the city tonight.

Posted by Dravis Bixel at 5:29 PM No comments: