I heard the other day that the Snoqualmie Tunnel was going to reopen. Apparently they even fixed what was wrong with it. I am still unclear who coughed up the money. On the state park website it lists the "official" opening as July 5th. On the other hand a shuttle service between Cedar Falls and Hyak starts up on July 1st. So it must be open before that. Even though it is more than two weeks from the real opening, I figured that I would check it out and see if they had opened it up. I mean, if it is fixed, why bother to lock it up again?

With that in I headed out today from Issaquah. To start with I headed to the Issaquah to Preston trail. Nothing really special. It is a route I take a lot. From Preston I rode down into Fall City. I know that I could take the Preston to Snoqualmie trail, but low and behold that doesn't actually go to Snoqualmie. You can take a single track trail over to the Snoqualmie Ridge development, but well, I have learned to avoid things called "Ridge". Also you have to do the crazy daredevil downhill along the Snoqualmie Parkway. 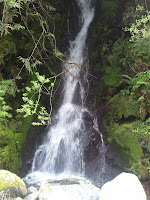 From Fall City it was out on 202 and then to hook up with the Snoqualmie Valley trail. That ends at the Tokul Road tunnel and doesn't pick up until the bridge over the Snoqualmie River. So it was a few more miles on blacktop around Mill Pond. After that it was 25 miles of gravel rail trail up to the top. Also 2,100 feet of elevation gain. I must admit my legs were aching pretty badly on the way up.

Then when I got there, the tunnel was closed. I know that I could have hucked my bike over the fence. Also the chain was just bolted to one of the gates, so if I had an adjustable wrench I could have opened the tunnel early. That wasn't 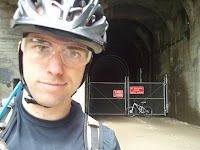 really the point though. I wanted to make see if the gates were actually open without having to commit a kind of crime. So I didn't take a role through the tunnel. The one thing I didn't see though was evidence of what was fixed. The tunnel looked pretty much the same. I guess I will have a few more weeks before I see what has changed.

After that it was the long journey back home. I did make one stop in Fall City. I grabbed a burger at Small Fryes. Oh, and a shake. They make really great shakes there. It was just the thing I needed to make the last 15 miles home.

I am just hoping my legs aren't dead tomorrow.