Well I said there would be more rides this year. So you get to read more boring re-caps of what I have been doing. After the long ride yesterday I wasn't sure heading out again would be such a good idea. My legs were feeling much better than I thought they would. Why not get back on the bike then? 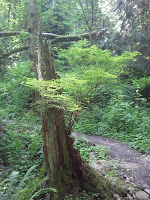 So this afternoon I rode out to Grand Ridge again. I took the trail to the top. Lots of tight switch backs. I am getting better at it though. The last time I had to stop around a lot of the steep hairpins. This time around I only spun out once and had to hop off.

After hitting the top I cruised down the back side of the ridge. I have done the back side once or twice, but never gone all the way out. Wow, that was a lot of fun. Really my kind of trails. Lots of nice juicy single track. The best part is that it is through lush forest. On a hot sunny day, it is so beautiful. Highly recommended.

Well, at least until you get to the swamp. There is a big section at the bottom that is just a mud bog. Some kind people have put planks across most of it. I don't mind getting dirty, but I was hoping to keep my shoes from being soaking wet. The last bit through the swamp was covered with a boardwalk. I suppose that is only half finished. I am excited to see that complete because from there it is just a couple of switch backs up to Duthie Hill Park.

At Duthie I met up with some of the crew I ride with on Thursdays. I have only been to the park once before a few months ago. This time around, it was about like I remembered it. Lots of nice fast trails. Good flows and cool jumps.

At least when you do them right. I followed a couple of the guys down one trail and didn't look where I was going. I hit a big drop and ended up going endo. I landed on my head, which fortunately I had my helmet on. Please note kids, wear a helmet. Actually, hitting my head wasn't bad. It was my ribs hitting my stem that hurt. It is still a bit sore now. At least it was on the opposite side from the ribs I hurt on the way to Rohija.

After that the guys and I went out for burgers in Fall City. We sat by the river and skipped rocks. Watched the sunset. It was a great end to the solstice.

One final note, since it is the first day of summer I am happy to see my summer legs coming back. No I don't mean all muscled and tan, though they are that. I mean covered in bruises, cuts, and scrapes. Wounds heal, but memories last. Never be to afraid for your life that you forget to live it.