The last couple of years Jake and some of the .83 crew has gone out to the Washington coast for some razor clamming. It is a great excuse to get together and fool around outside for a weekend. Yet for some reason I have missed it the last two years. This year I decided to change that. Well, sort of.

One of the other .83 guys, Ben, wanted to ride out there. It is 126 miles, which sounded like something I would love. At first I thought it was going to be a one day, on paved roads. Instead it was going to be two days over forest roads. In the rain.. 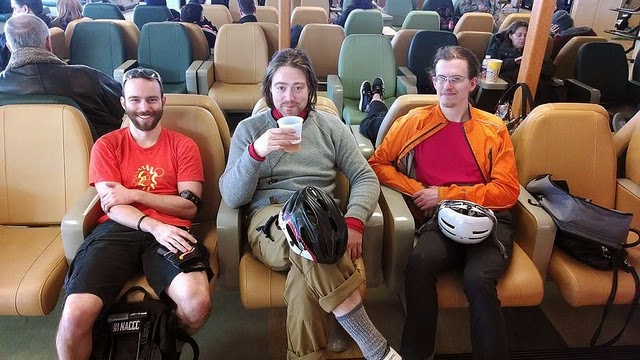 I met up with Ben and Fred at the ferry docks in Seattle. We sailed to Bremerton and rode out from there. It was a bit wet and riding along. The section of Highway 3 was noisy, but not too bad. But it was just a short section. After that it was a quiet highway off to Belfair. We stopped at a store for supplies and food.

From there on the trip was beautiful. The night was cool, but not cold. Most of the roads we were on were back country highways. Quiet and peaceful. Not many cars to disturb the silence. Instead we could hear the frogs, or watch the stars merge into the lights along Hood Canal.

We stopped again next to Highway 101 at an abandoned roof. I guess it used to be a shack, but there was no sign of the walls that I could see. Instead it was just a roof sitting in the gravel on the side of a highway. We ate some food and grabbed something to drink. The three of us were having a great time. Joking and laughing. Talking of past adventures. I couldn't help but think about how few other people would ever get to have an experience like this. There is no way to take a picture of a moment like that. Enjoy them when they come.

From there it was up into the mountains. A couple of miles of good paved road before everything became a steep gravel road. We stopped just before midnight to eat again. (Touring like this burns lots of calories.) Ben and Fred discussed where to camp. I wasn't familiar with the area, so I let them decide.

Eventually the plan was set to go to the Brown Creek Campground. This may not have been the best idea as it began to pour. The brief respite from the rain was over and making up for lost time. By the time we reached Brown Creek all of us were soaking wet. We set up tents under the awning of the Brown Creek signboard. It took a bit, but I was able to keep the wet off of most of my dry things. I crawled into my sleeping bag and slept fairly well inspite of the downpour.

Ben was not as lucky. He spent the night shivering in a wet sleeping bag. So he bailed out early. It was down to Fred and myself.

We took a bit more time getting ready, but eventually got on the road. Conditions hadn't improved much. The roads were still dirt. It was still raining. The first big challenge of the day was a thousand foot climb up and over a ridge. I thought the decent was worse. It was cold and I was soaked to the bone in spite of several layers of wool and a rain shell. The rain on the downhill slope had turned to sleet. It was a chilly ride to the bottom. When Fred and I got there, it was only to do it again. We had to climb up and over another ridge about the same height. It hailed on us going down the back side. That part was an exquisite misery and I had only myself to blame.

We stopped for lunch at the Wynoochee dam. There is a little gazebo overlooking the dam that would get us out of the rain. Fred and I stood around shivering and cramming food into our faces. I wasn't sure if we were using up calories more for cycling or took keep from freezing to death. Just before we left I stepped in to the bathroom next to the gazebo. I was only inside for a couple of seconds before turning around. I asked Fred "Why are we being idiots and not standing inside the heated bathroom?" Fred rushed over and also noticed a hand dryer on the wall. We had that thing running for the next five minutes straight. 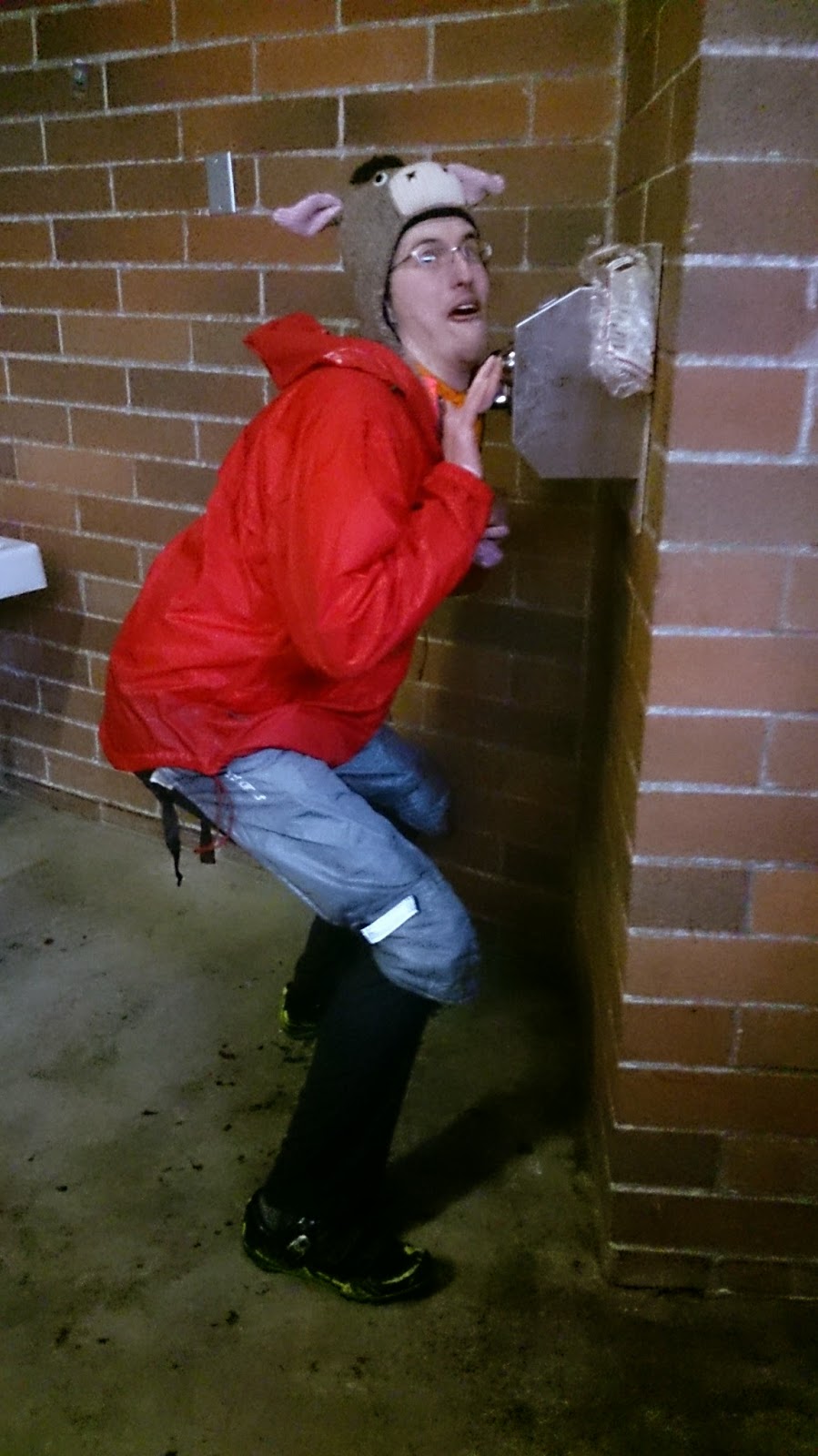 The next 20 miles or so were pretty good. The rain was petering out. For the first half the roads were still dirt, but mostly flat. The second half was paved and we could cruise along the rolling landscape pretty well.

We crossed over 101 again and headed off into some forestry land. Half a mile in we met the first obstacle. It looked like the road just ended at a river. Almost. On closer inspection we found a raft of logs had been tied up there with steel cable. It was now grown over with grass and trees. You couldn't get a car over it, but a couple of bikes weren't a big deal. Onward from that point it was a maze of logging roads. They were usually well marked, but not always. There was one other problem. The roads listed on the map were exactly the same as the ones that actually existed. 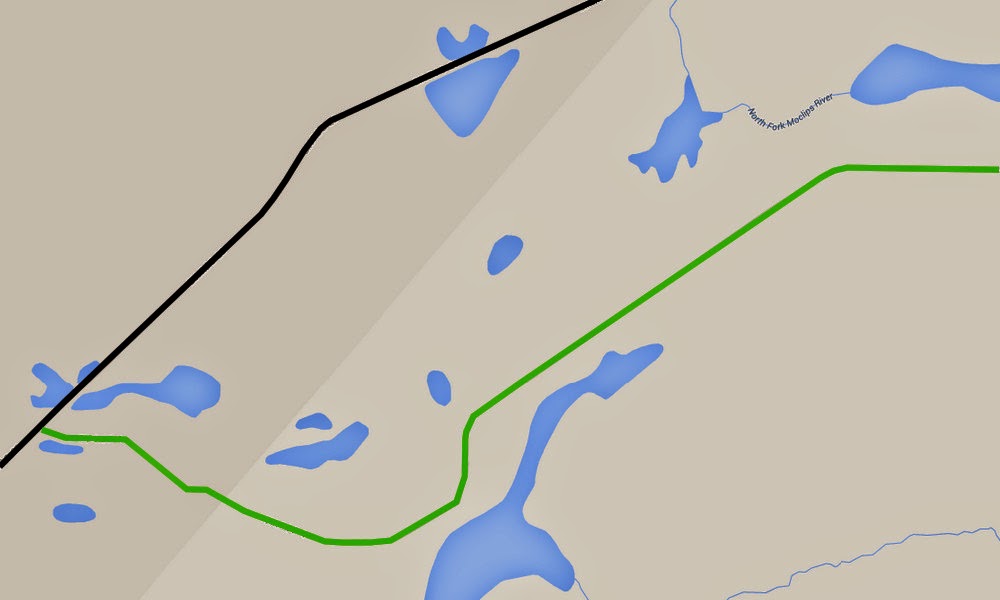 The road we were supposed to be on kept getting worse and worse. Eventually, it was became overgrown with trees and then stopped all togehter. A look at the map suggested we weren't on the right road, and headed back down to find it. It turns out that one didn't fair much better. Two miles short of what the map said the road just ended. Actually, the road became a creek that continues in the open for a bit before being swallowed by the forest. We could have continued looking for another route, but there was no guarantee that the map would be any more accurate with those road. We knew we weren't far and on occasion could hear cars driving along the road. 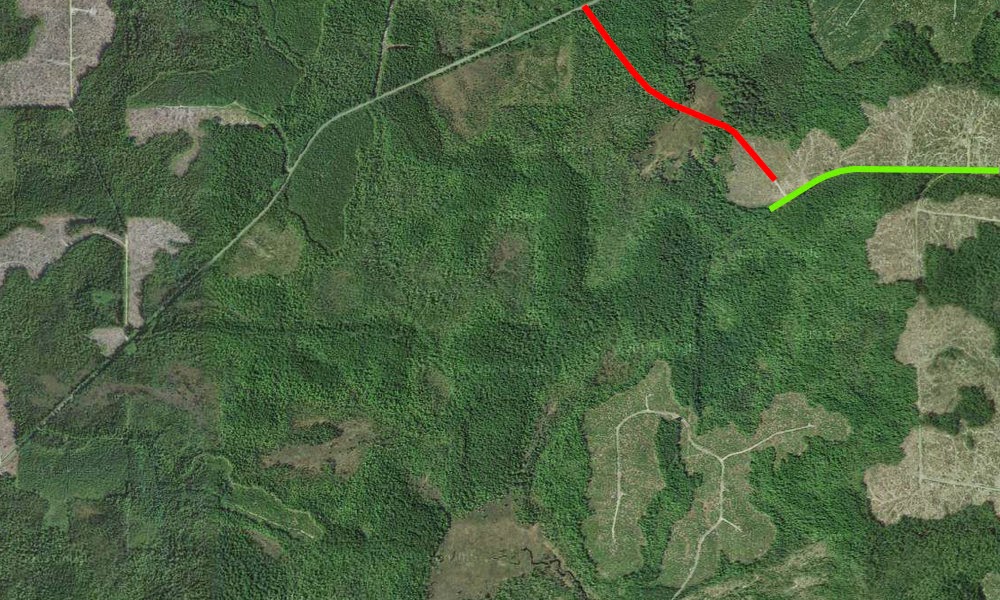 So Fred and I ended up bushwhacking through the forest and swamp for about a mile. I was generally leading the way with Fred looking on GPS to make sure we were heading the right way. Dragging my expedition bike through deer trails wasn't easy. On a few occasions I came to a clearing that I thought would be the main road. Instead, these were just large puddles. At least trudging through six inches of water was easier. My legs were wrecked with scraps from bushes and twigs. Twice I found an old gravel road bed. Sure, overgrown with trees, but clear enough I could even ride for a bit. Each time I would think it had to lead to the main road. But both times, I was disappointed. The road would just die out in the forest without connecting to anything. Around 7:00 PM I finally found the road. I can't tell you how relieved I was to see it. 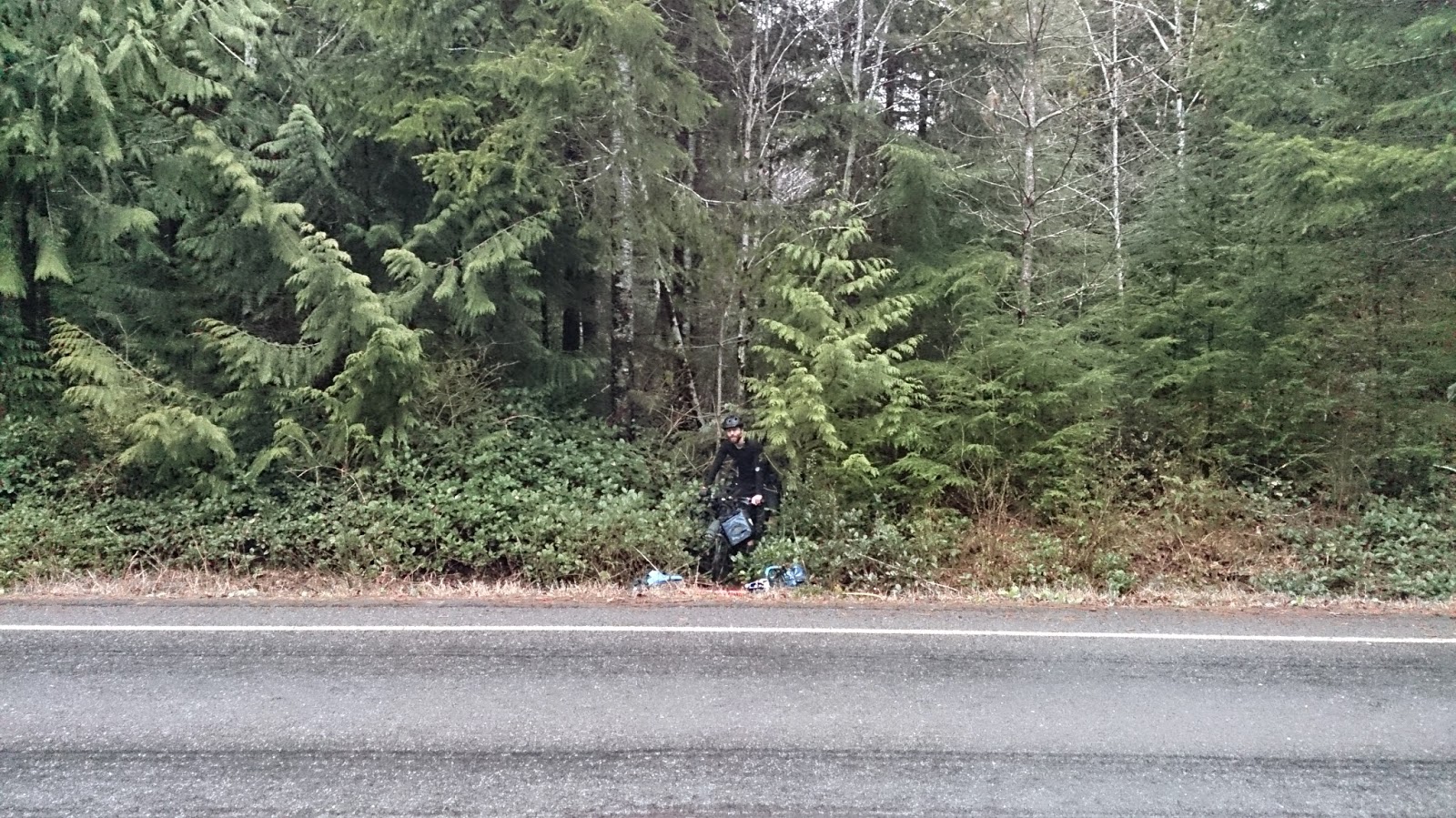 Once we had found the paved road, it was a pretty easy ride to Pacific Beach. Fred let me draft off of him most of the way in, so the miles flew by. We ended up at the campsite just after sunset. Some of the folks there were just starting to get worried. But we made it, and shortly started to eat all of the food. Fred and I spent about half an hour eating everything left out on the table. The rest of the evening was spent getting warm around a fire on the beach.

In spite of the hardships I had a great time. Or, maybe it is because of them. Food tastes better when you are starving. The fire is warmer. Good friends more important. There is also something to be said about being outside and enjoying the wild places. I was traveling areas I had never been to and never knew existed. It is an experience I don't have too often these days.  I look forward to the next trip. 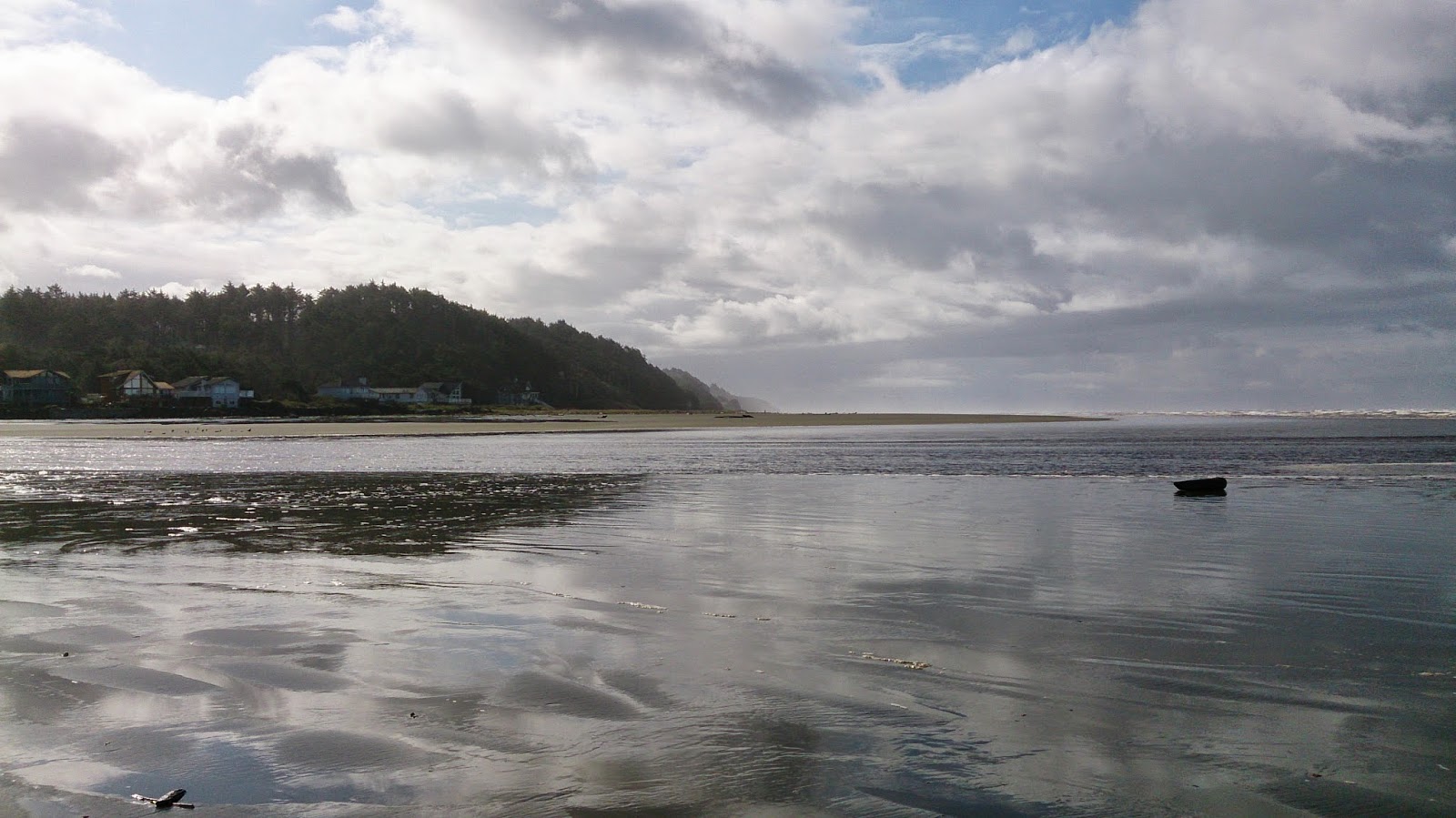