I wanted to put in a couple of last notes about bicycles in Singapore. Sadly I never got to ride there, which does grind my gears a bit. There is always a next time, I guess. I wish I had known about the East Coast Park earlier. There is a great path along the ocean and they rent bikes for cheap all along the beach. So that is more of a note to any avid cyclists planning to travel to the region.

That said, what I really wanted to mention was the work bike culture in Singapore. I love the idea of a bicycle as an integral part of commerce. A way for everyone to get around. A way to transport goods to market. It appears that the Singapore used to be much more dependant on bicycles than it is now. There is this article from Copenhagenize. I also found two different forms of tricycle that I thought were pretty cool. 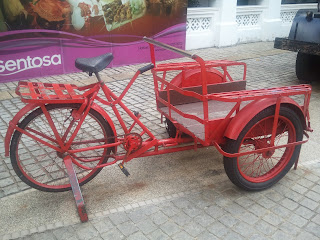 The first is the heavy duty cargo trike. I have seen this style before, just nothing so burly. It is as engineered for hauling heavy loads as a dual-suspension mountain bike is for going downhill. The wheels look more like they were made for a car or motorcycle. I imagine it would hold a couple hundred pounds. Then again, you would need some real legs to get that thing going. I also like the brake. That is the handle right below the seat. If you look carefully you will notice that pushing down on the handle pulls the brake pads into inner rim of the back tire. That is very much like the style of push-rod brakes. 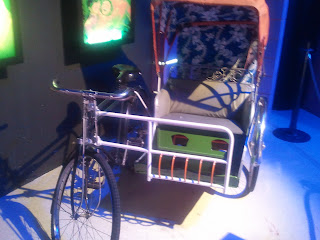 The second one I wanted to mention is the tricycle rickshaw. At first I thought it wasn't that much more interesting than the rickshaws Seattle has. I was wrong. The side-car for the passenger is completely separate. So unlike the cargo bike above, it doesn't require a custom built bike frame. You simply bolt the side-car on in three places and you are ready to go. I love the ingenuity of the whole thing.


So, there you have it. A couple of interesting work bikes from my trip to Singapore. The bikes in the pictures come from museums. I did see examples of both out on the streets though. The use of work bikes is still alive in Singapore.