My friend Torrey invited me to go out bike camping over the weekend. The destination was to an abandoned camp site out on forest service land. Or maybe it was just an abandoned picnic table. The reports weren't very clear. But we did know there was a lake out there somewhere. Seemed as good a destination as any.

I met Torrey up in the U-district. From there we took the Burke out of town. I have sort of a love/hate relationship with the BGT. It is a flat train with few crossings. It also goes for a long way and connects Ballard with the trails on the north end of Lake Washington. This also makes it very popular. So on a Saturday morning you spend a lot of time avoiding runners, joggers, dog walkers, and all sorts of people. It isn't that I mind other people getting out to enjoy the day, just that it is a bit more stressful.

In Woodinville we left the the comfort of the trail and headed north on the highway. In many ways I liked this better. Sure there were fast moving noisy cars, but there was also a wide shoulder. Torrey and I could just cruise down the road. And we did. The two of us made great time into Snohomish. From there we took the Centennial trail up to Granite Falls. Stopped to supply for the night.

Out of Granite Falls we took the Mountain Loop Highway. That wasn't as good. Often there was no shoulder. Or it would come and go. But we were starting to get really out there so traffic was usually pretty light. Still, it was nice to get off the highway and turn onto Green Mountain road.

I will also caution my dear readers out there to avoid any road with the word "mountain" in the name. This road was steep and steeper. At least it was paved. When we crossed into National Forest land the asphalt disappeared, but the road wasn't quite as steep. It wasn't very well marked either. Usually the forest roads have something to tell you which one you are on. Not these. We took a couple of guess and got a couple of guesses wrong.

Eventually we did find the right road. It had been closed to car traffic, and it was apparent why. There were a couple of really nasty washouts on it. When the road wasn't getting washed out it was often unridable, either due to trees down on the road or to being so steep. 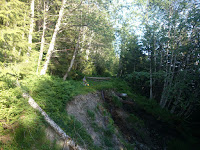 Torrey and I got to the top of the ridge and one section of the road ended in what at one time must have been a parking lot. Everything from there on out had not been a road for a very long time. Clearly it had been at one point but it was not an ex-road. In areas where the path slumped down the ravine I could see in the cracks a well laid road bed. There were sections that were even ridable. Mostly it was overgrown though. Lots of tree falls. Lots of culverts that had failed and been washed away. There was one point where the footbridge across a small stream had collapsed. That was disconcerting. 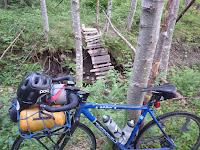 Still the views from the ridge were gorgeous. It was wild to think about how far out of the city we had come without going that far. We were out of cellphone range. The only evidence of human effort out here was the former road we were using. This is one of the big reasons I live in Seattle. You don't have to go very far to find something wild. 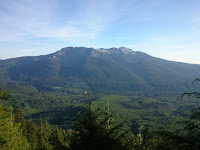 After two miles we got to the fork. I had left the navigation up to Torrey. He said we should go right, and we did. The path at this point was almost non-existent. We were bushwhacking through trees and bushes. It was like the Clam Slam adventure I did a few years back. Just shouldering the bike and diving through a bush.

After a few hundred yards we decided we must have taken the wrong turn at the fork. So we went back and took the left fork. It wasn't any better. We went down about as far and didn't see the lake. By that point the sun had set and we really needed to set up camp. We found a nice mossy patch of old road bed and pitched our tents there. Torrey and I ate a bit of food and chatted as the stars bloomed overhead. 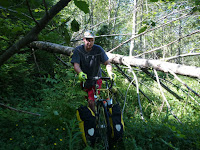 The next morning we got up and packed our stuff. The bushwhack out to the real road wasn't any better this time around. At least we knew what we were doing. Things got faster back on the Forest Service road. Although Torrey had a flat. I had some food while he fixed that. Then right as we were ready to leave, I noticed my tire was flat. Crap. So he had some stuff to eat while I fixed my flat.

It was a fairly easy cruise back into Seattle. I left Torrey in Woodinville. On the way home I heard some other friends were swimming at T-docks. So even though I never did see Canyon Lake I did at least get some swimming in.