It has been a year since I went to the NACCC here in Seattle. That is the North American Cycle-Courier Championships. It really changed my life. It set me on a new path. I became a bike courier last winter in hopes of being able to compete. While winter is not a really great time to become a courier, I was set. My goal was to ride in the NACCC in 2014 in Minneapolis.

I landed in Minneapolis at just after 10:00 PM on Friday. I reassembled my bike and rode out from the airport. (That was the third time I have done that.) The night started out well, it was a warm night sticky with humidity. In the distance I could see lightning. Before I had gone a mile I was riding through a thunderstorm. Other than the rain, it was a great ride though. I made it to the place where the NACCC contestants were hanging out. I got the time and place to meet the next day. 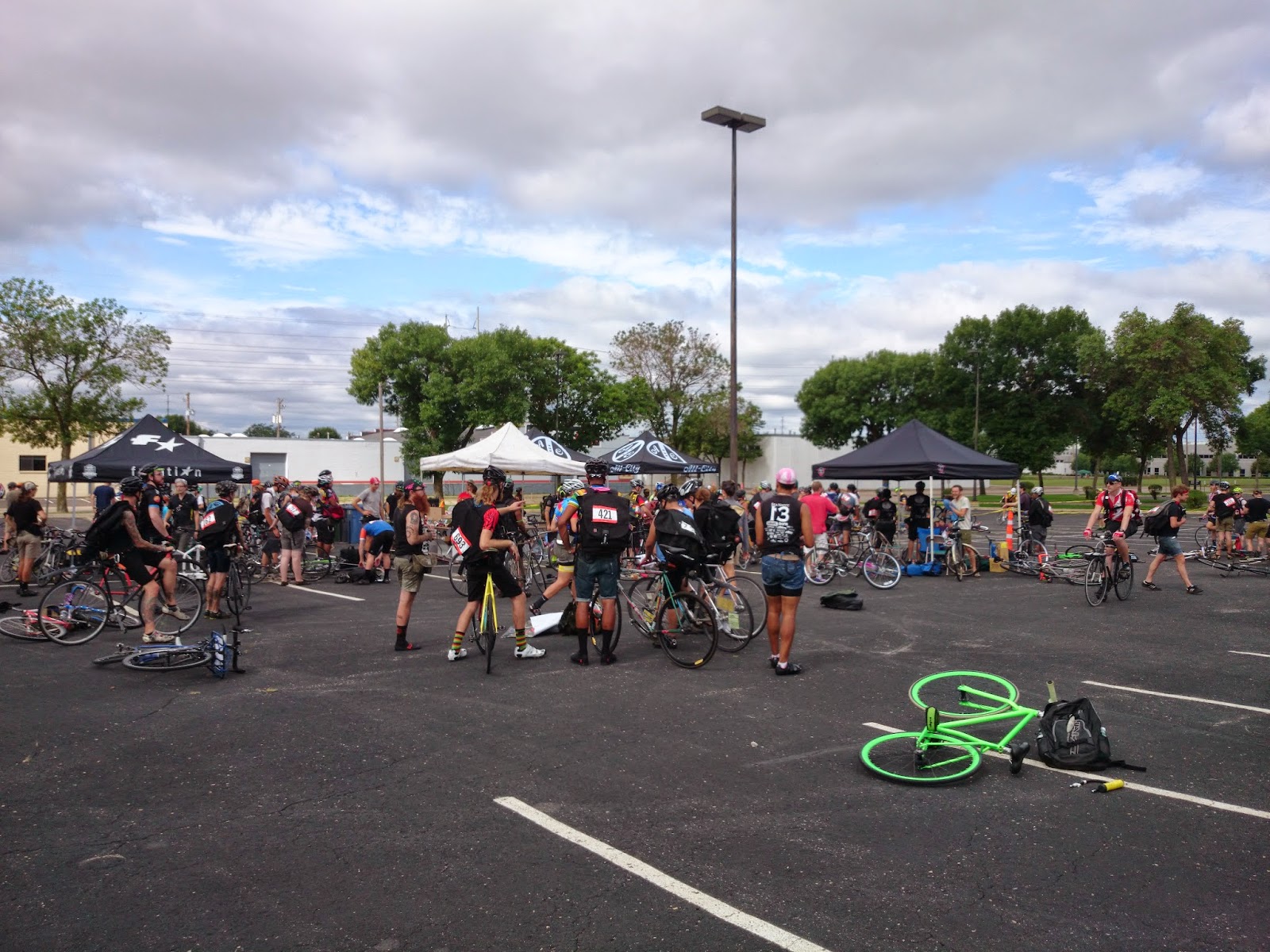 Waking up on Saturday I headed to the qualifier. I signed up and even had time to ride through the course a couple of times. Then I got ready to race. This isn't like any bike race you see on TV, though. It isn't rated in time or distance, but in "money". Each rider gets a list of jobs. These jobs all list a pickup location, a drop off location, and a value. Longer jobs earn more. But the race is as much about being smart and organized as it is about being fast. Racers get one hour to make as much money as possible.

My race started at high noon. I spent the first ten minutes without a clue what I was doing.  Then I got organized and started making some real (actually fake) money. I was going fast and racing through my stops. I was feeling great about how everything was going. At the end I had maybe enough time for one more job, but I didn't take it. I was worried about going over time.

The organizers of the NACCC then lead a huge group out to a secret lake. (I would have called it a pond, but anyway...) I met a bunch of really cool people from all over the country. Went swimming until the sun set. Then we raced back into town for the after party.

The party was held in the alley behind a bike shop. Super fun, but I think the best part of it was Taco Cat. Normally they will only deliver you tacos on a bike. However for this party they had set up to server fresh tacos to all the NACCC participants. It was amazing. The tacos are so good. If you get to Minneapolis, please try some.

The only bummer of the night was that I missed the qualifier by two places. They took the top 60 racers, and I was number 62. To put it another way, I was short of qualifying by 25 cents. Dang. I guess I should have done that last job. Oh well. 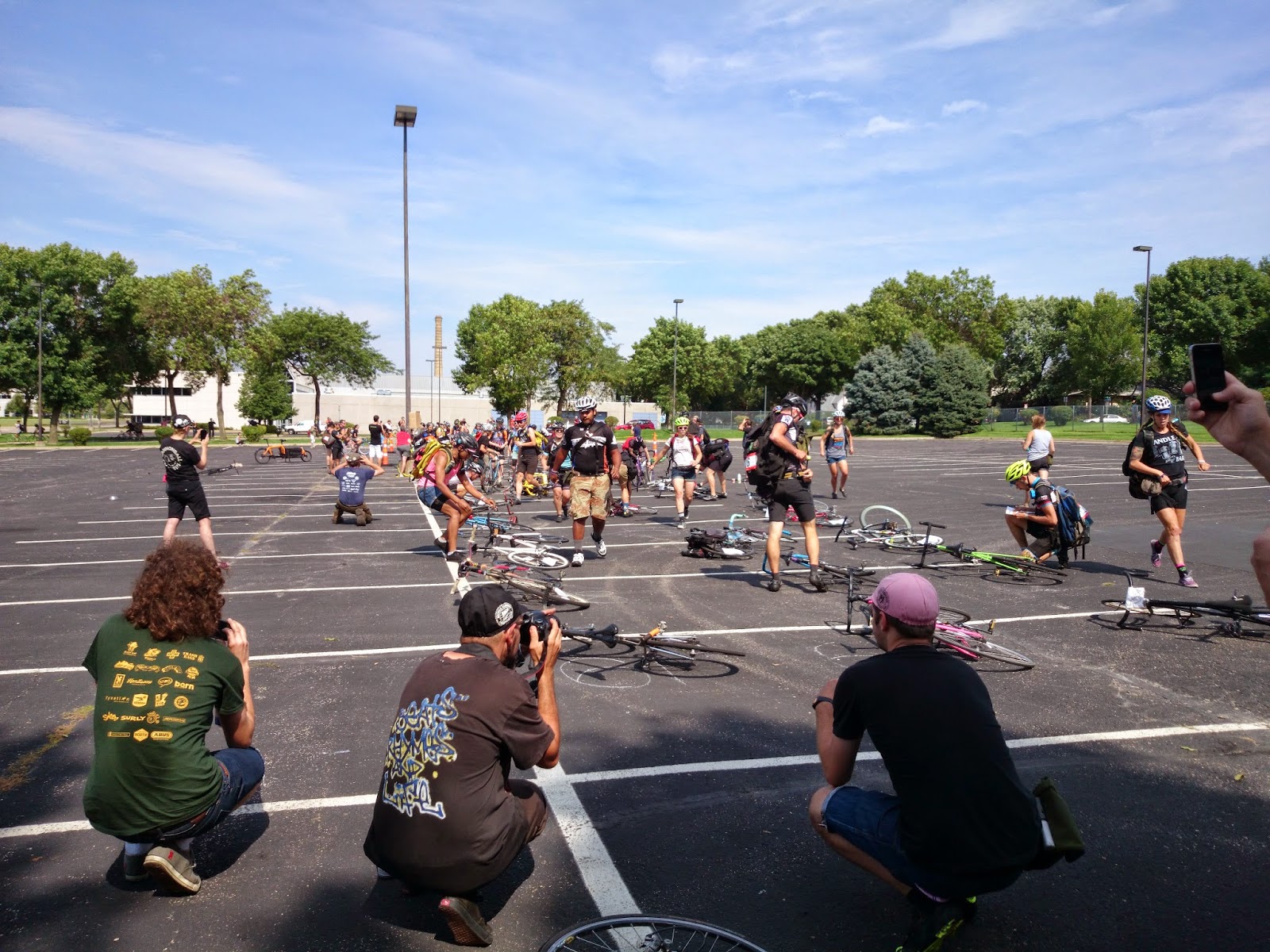 I did stop by to watch the finals the following day. Before the race began the racers were all looking for last minute gear. "Can I borrow a pen?" "Can I borrow your bag?" One girl even borrowed my arm watch. It makes sense. The final race is three hours long. Some of the jobs have a time limit. So being able to manage your time is very important. It took a while to get everything organized and begin the race. Once it started I did find a great spot on the far side of the course to watch the race from.

After an hour of watching the riders go round in circles I figured it was time to get going myself. I hadn't flow half way across the country to sit around . Having never been to Minneapolis before I decided to explore the city.

The city itself has a great mixture of old brick buildings around the edges. More steel and glass in the center. I was shocked at the number of sky bridges. It probably makes a good deal of sense in winter. It seemed like you could walk most of the way across the city without setting foot outside, though. Also, the city is very flat. Coming from Seattle it is a bit weird to ride across town without hitting one hill.

I spent some time at the sculpture garden. Meh. It seemed a lot like the one in Seattle. Neither of which I am very impressed with. Still, it was a gorgeous day and nice to be in a park outside. 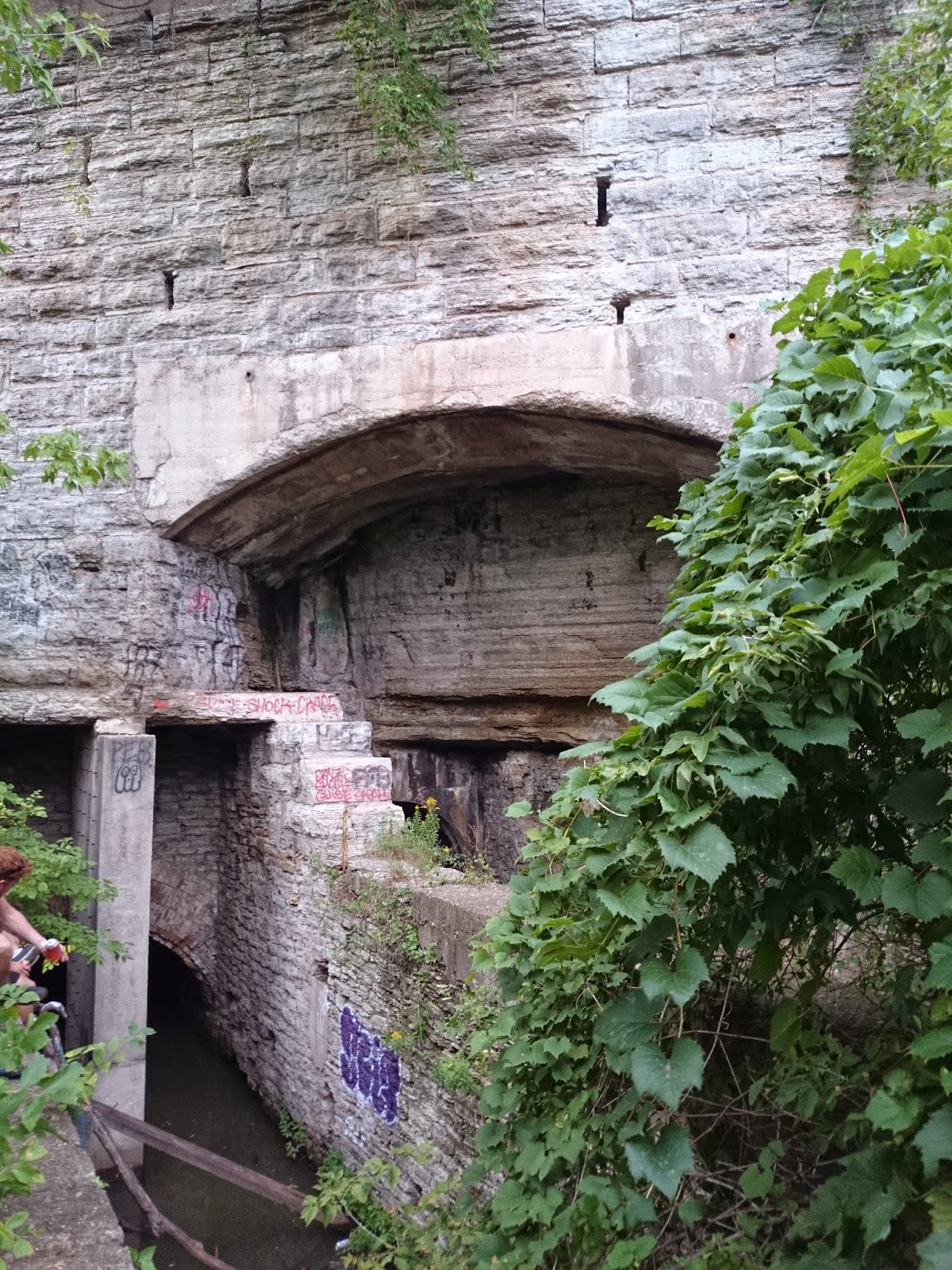 I got back just in time to catch the end of the final race. Not that it was all that exciting. Again, it isn't about being the first person back, it is about earning the most "money". The real winners would be announced later. The organizers did put on a few extra challenges though. Foot down. Quick lock. I hung out and talked with more people. Meeting so many different people, it is crazy to see how different they all are. Race, ethnicity, education. Then only similar thread between all of them is that they love riding bikes.

After the challenges were over a group of people headed to a secret spot on the Mississippi river. We didn't even get out of the city though. The secret spot was a collection of decaying structures overgrown with trees along the river bank. On top of the cliff above were some old factories. It felt like being in the middle of nowhere even though it was only a couple of miles from down town.

Just before sunset the group headed over to a bar for some food and to announce the winners. We were enjoying the patio for a bit before more thunderstorms rolled in. The whole mass of soggy, sweaty cyclists jammed into the tiny place. After the winners were announced I said my goodbyes and headed out into the rain. I had an early flight to catch.I am looking forward to the next one. Denver here I come!