The Christmas Disaster ride was yesterday. I love any chance I get to do something crazy and unexpected. This ride/race was that and more. There are some nights that are just so awesome you can't help but love your life.

Of course that isn't the way I was feeling when I got to the start. The meetup was at Twilight Exit and by the time I got there I was soaked and freezing. It was raining and in the mid thirties. I had a lite windshell on to keep out some of the rain. My gloves were soaked through freezing my hands.

I had hurried over because I was afraid of being late. I need to remember that nobody does anything on time around here. By the time we left though the rain had stopped. It was still cold, but at least it was dry.

I hadn't been to a Disaster before so I wasn't quite sure what to expect. To make this worse, the rules were complex which only added to the confusion. From what I understood from Ben, who was running it, this was intentional.

I headed out for the first checkpoint which was at the end of Lake View park above the switchbacks. There were actually two spots that fit this description. I was one of nine people who selected the wrong one. Whoops.

Then it was off to the Arboretum for a round of golf. Nine "holes" or destinations to reach. Each scored in order of who got there first. When the group started I headed off in front to head for one of spots I didn't think anyone would be going for. But then everyone was following me. That would have worked except I dropped my chain on the way and a bunch of people passed me. I ended up getting there 6th. My best scoring was 3rd. At the hole I skipped because I thought everyone was going to head to it, I came in 4th. I guess the whole group skipped it as I rode by. There I go overthingking things.

At the finish line Ben had a couple of "reindeer games" to play and make up a few lost points. I won a couple of these. One by jumping into the ship canal... at night... in December... It wasn't that bad actually. Though I did push my way into a spot by the fire. 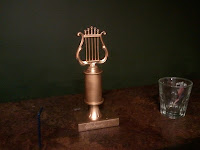 From there it was over to The Zoo for prizes and gift exchange. I even won an award. Not for winning the Disaster race though. (Ended up in 3rd place, even after my swim.) My award was for wear shorts and a t-shirt in all weather, handed over with the admonition "get a coat hippie".

The whole night was a blast. I want to give another thanks to Ben for putting this on. Also thanks to everyone who manned a checkpoint in the cold. It was an awesome evening. I am looking forward to doing it again next year!