But the first step is to take some time to ride the route and see how it is doing. So that is what I did. Again, everyone bailed out on me. Mostly because they didn't want to get wet, and it did rain, but not at first. 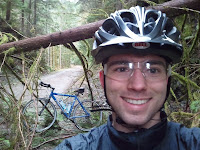 Horse state park. It was actually nice when I left. Maybe sprinkling a bit, but the sun was poking through the clouds. The first three miles to Ragnar had a number of tree falls from the recent wind and rain storms. I tried to clear what I could, but a few were too big for my little pocket knife to saw through. So I had to hop my bike over them.

After that it was a pretty easy cycle, except that it began to rain a bit harder. I was halfway across the Mine Creek trestle when I was stopped by the snow. I was hoping the snow level was a bit higher, but that was as far as I could ride my bike through. From there I walked about half a mile up to the Garcia road crossing. I tried to scout along there for some good camping sites, but the snow, steep road and heavy rain really put a damper on that.

The ride back to Rattlesnake Lake was easy but miserable. I was soaked to the bone. It had been a while since I was that wet on a bike. (Ghana, I think.) Plus it was cold. By the time I got back to the car my feet were numb.

So that was the first scouting trip. I am still working on the date for the Rock'n Horse 2.1. Stay tuned for more updates.