A new year is time for new rides. I have been riding with a new group of cyclists. So far it has been a lot of fun. They seem to have just the right attitude for me. They like riding and like bikes, but don't take anything too seriously. They are also pirates.

The first race of the year is the FHR. It is a hijack of the Chilly Hilly bike race course put on by CBC. It is 33 miles around Bainbridge Island over a few good hills (not as bad as Rwanda, though). It was cold and snowed a few times. The last half of the race it rained pretty good, too. I ran the course in a bit over two hours, which I am proud of.

At the end, there was hot chili and a place to stand out of 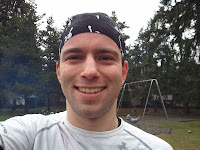 the rain. Also, a fire pit to warm ourselves with. There was also a raffle for schwag at the end. I won a Osprey Viper 13 pack.

In all, a sweet ride and I am looking forward to more good times in the future.